The Beacon is our quarterly newsletter where we update you on the latest news and developments with CRA’s projects. Below are snippets of the lead articles and links to download the full issue.

Not many 15-year-olds lay awake thinking about opening their own brewery, but Hopper Seely did. His father, Bill Seely, introduced the craft to him as a way to spend quality time together. Bill was unwittingly cultivating a deep passion within Hopper that would one day become Grind City Brewing Company. The father and son duo opened the brewery in the Bearwater community this past fall and business has been booming ever since. Some loosely call the neighborhood Uptown (just across the street from Washington Park), but a true North Memphian will proudly let you know, this is Bearwater!

When Hopper began looking for spaces to build this lifelong dream, he hoped for a location that placed him on the border of need and influence. He wanted to be immersed in a neighborhood he could serve while also engaging with the massive growth and development occurring in Downtown Memphis. 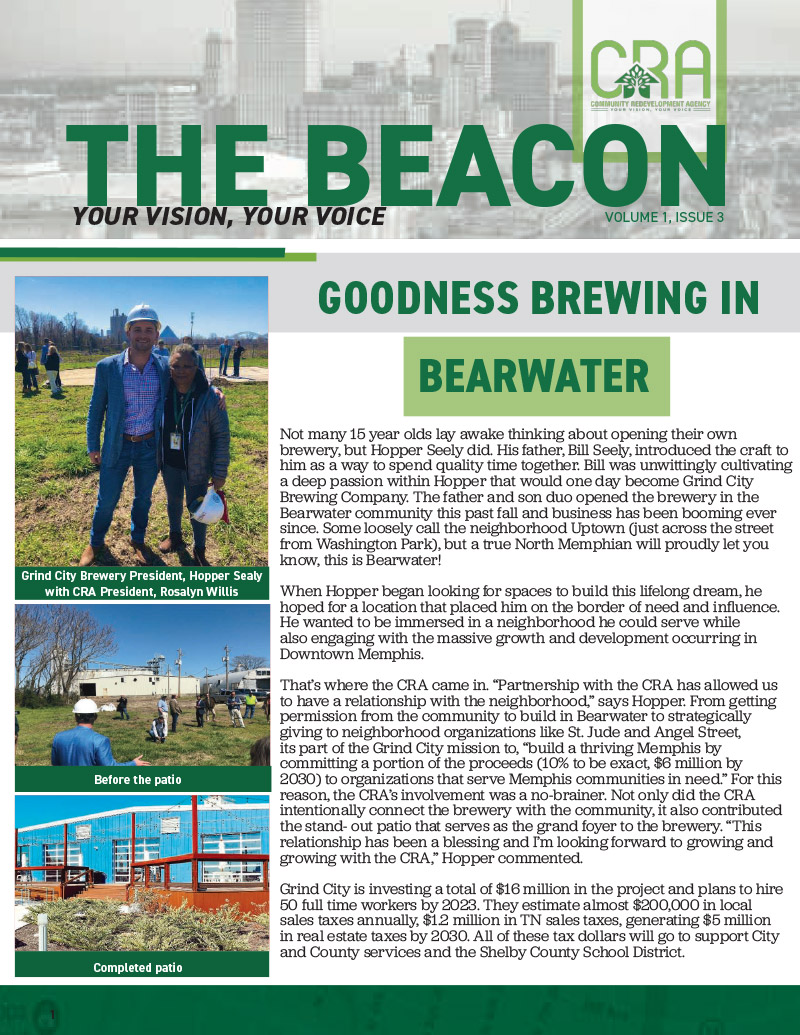 Lead Article: Let’s Do Something Big

Take a stroll or drive through North Memphis and you’ll likely see a new Habitat for Humanity home going up. We sat down with Habitat’s CEO and President, Dwayne Spencer (pictured left) to chat about one of our most vital partnerships. “Some people think we build little houses and give them to people for free, but that’s not true.” Habitat removes the barriers in homeownership so that more people can enjoy a decent place to live. “We do this work all over the city, but our partnership with CRA provides the funding Habitat needs to go beyond building affordable homes. We can now strategically invest in the longevity of North Memphis.” 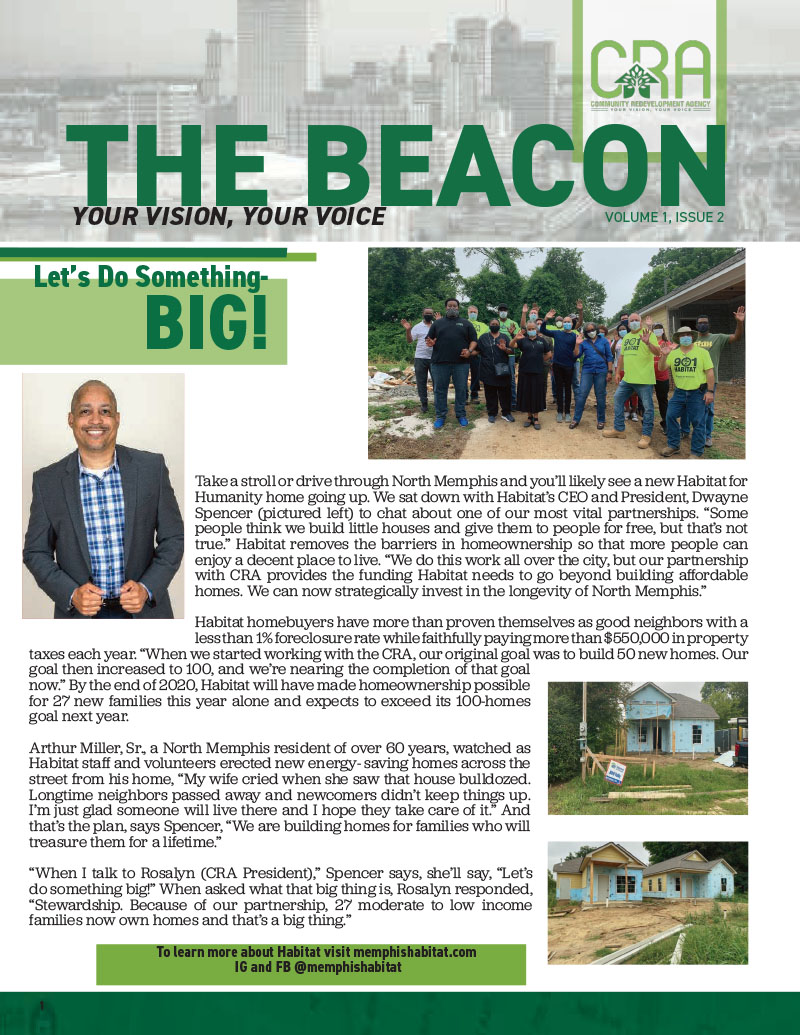 Lead Article: Born by the River, a North Memphis History

In its earliest days, the community slightly North and East of the Mississippi River was bustling with new life and industry. A cotton-based economy previously built on slave trade was transforming in the wake of the Industrial Revolution. People from all over the world, namely Ireland, Italy, and Germany, immigrated to Memphis to build lives and a strong future for their families. They worked for local companies and the area was more diverse and industrious than ever. 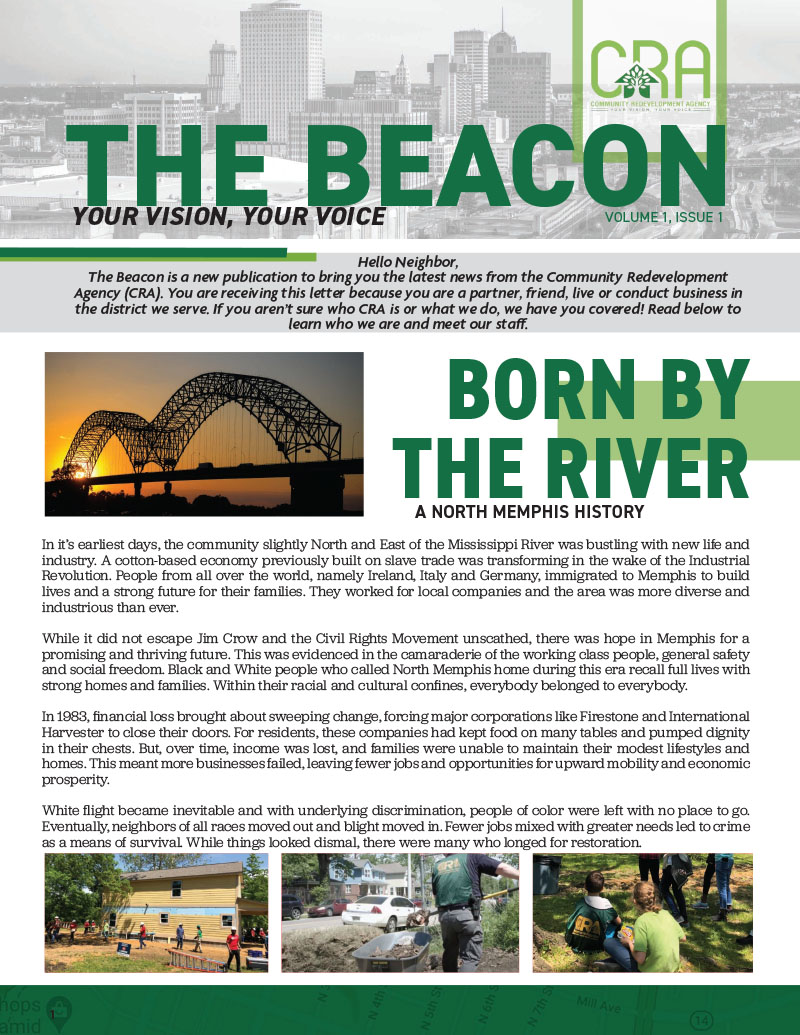 Erin is the newest member of the CRA team. She is a writer, performer, host and event producer. A Memphis native, Cole grew to appreciate the beauty in her city through experiencing the culture and people in other places. She says, “In all of the world, there is not a group of people like Memphians. At our best we are painfully honest and wildly courageous with astonishing perseverance.” Cole gained a Bachelor of Arts in Communications and a Minor in Theatre from the University of Missouri- Columbia. Her work to activate civic spaces and transform communities in Memphis through the arts connected her with CRA. “The arts are a gold mine in connecting an individual’s heart to a movement.” Cole says she enjoys seeing people “come alive” to a new way of thinking and living. She’s excited about telling resident’s stories in a way that invites others to engage and invest in the longevity of their community.  “It’s easy to see everything that’s wrong in a neighborhood, but in my short time with CRA, I’ve met at least a dozen community builders who are pouring out their lives for this district.” Cole believes there are hundreds of stories to tell. “I look forward to archiving what’s being done so that future generations understand the sacrifices cemented in the grounds they walk.” If CRA accomplishes its objectives over the next 30 years, the Uptown and Binghamptom TIF districts could become models for similar communities around the country. Like CRA President Rosalyn Willis said, “This is sacred work,” and the impact will never be adequately quantified. But, in these newsletters, Cole plans to give readers a glimpse into the lives of those who have embodied the change they want to see.

To share a story about a neighbor who is making a difference in the Uptown TIF district, please email Erin at info@cramemphis.org 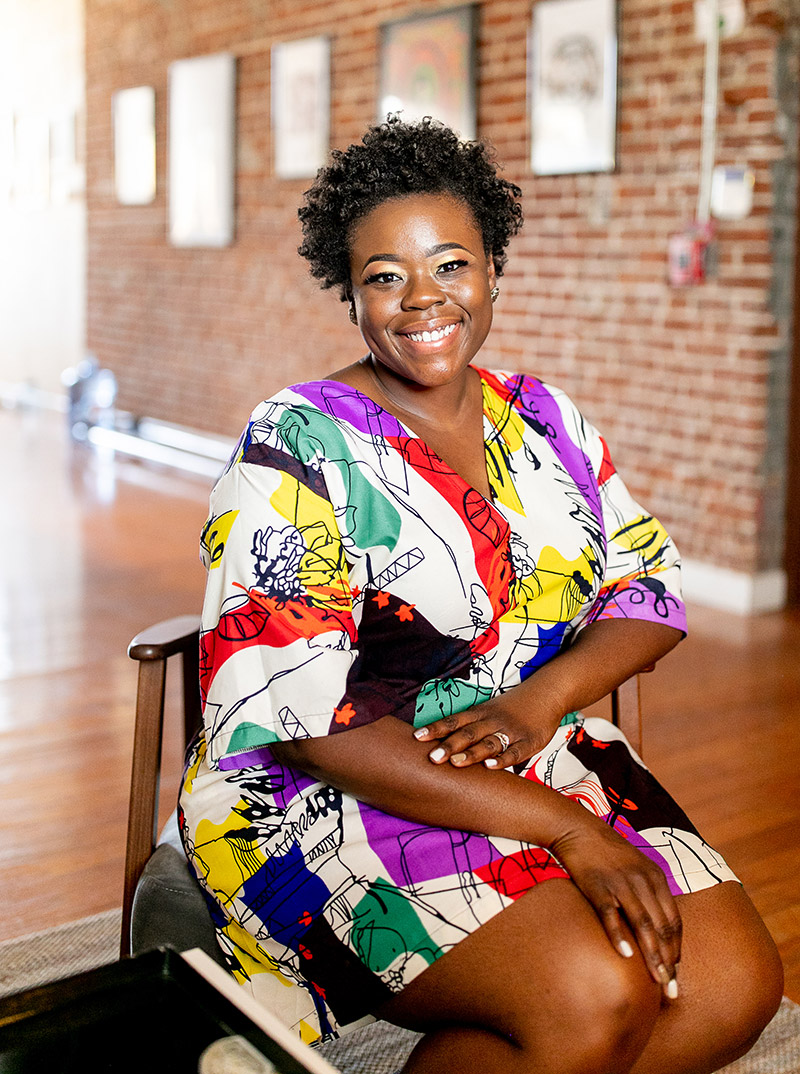 Editor of “The Beacon”

The CRA envisions every neighborhood in the City of Memphis and Shelby County providing its residents with a healthy and safe environment, economic opportunity, affordable housing, and excellent quality of life.